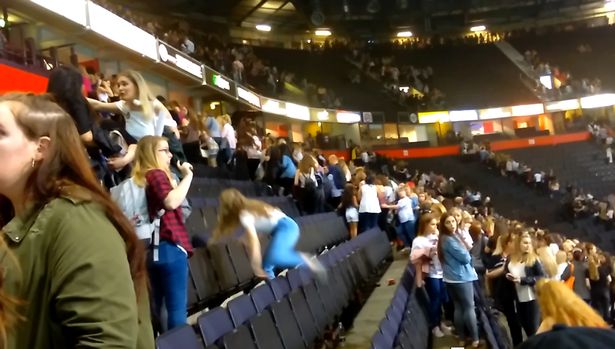 A leading Welsh mezzo-soprano has told how a dream night out with her daughter turned to horror after they were caught up in the Manchester terror attack.

Sioned Terry took her daughter Nel to her first gig, to see Ariana Grande at the Manchester Arena, for her 11th birthday.

It’s a night the singer from Kinmel Bay will never forget for all the wrong reasons.

Ariana Grande had finished her set and as they were leaving the venue the bomber struck.

Police confirmed 22 people died in the attack, including a number of children, and 59 were injured.

Mrs Terry said: “As soon as the house lights went up there was a loud explosion that sounded like a very powerful echoing firework. There was an initial moment where everyone was a little bit disconcerted.

“Some people had exited towards the main foyer and then rushed back into the arena. There was complete panic, screaming, crying, trampling, just trying to get out really and that was very frightening. You could sense the fear, it was tangible.”

It was only when she saw how seriously the police were taking the situation that the gravity of what was happening struck her.

She added: “We joined the queue as it got quieter, everyone was trying to get out. Some people were nervously laughing some people were shaking but it was apparent that when we wnt out the back of the building that something significant had happened, there was such a heavy presence of armed police, ambulances and I think there was a couple of helicopters there and there was announcement over the tannoy that the area had to be evacuated.”

Finding there was no way to get to her car, Sioned and her daughter were ushered into a hotel where they tried to book a room for the night but there was no space available.

In the panic one of the things that survivors were desperate to get hold of were phone chargers as their batteries were low after enjoying the concert and they wanted to get in touch with their families to let them know they were safe.

Luckily for Sioned a woman that she shared a charger with had family in the city and they took her in for the night.

An act of kindness that she was incredibly grateful for.

She said: “It’s very strange but I feel we met in that instance but I feel like I have known them forever.”

They got home safe and well but she still can’t stop thinking of those less lucky: “Nobody should go to a concert and not come home, especially children. They were in the right place exactly where they should have been enjoying life.”