'By 14 I was selling LSD' reveals former addict 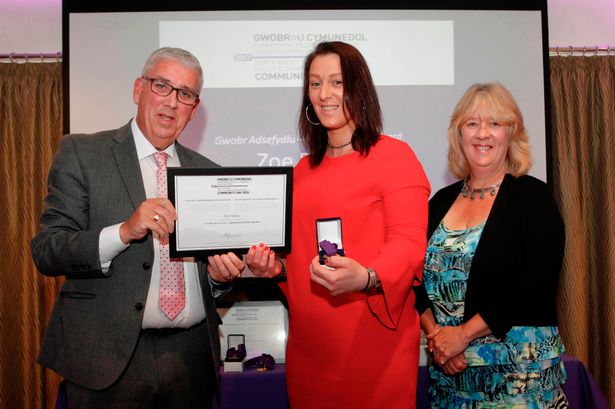 'By 14 I was selling LSD' reveals former addict

A former teenage junkie who sold drugs at the age of just 14 on the streets of Wrexham to feed her habit, has received a special award from a police boss.

Zoe Davies, 39, has been clean for just over two years, is reconciled with her family and is working to steer others away from a life of addiction.

She was presented with the Rehabilitation Award at Community Awards event organised by North Wales Police and Crime Commissioner, Arfon Jones at the Kinmel Manor Hotel in Abergele.

The mother-of-three, from Summerhill, Wrexham , says her problems began at about the age of 13 when she started hanging out with older children who were drinking, smoking and taking drugs.

Zoe said: “I was a clever kid at school, always in the top sets and I had a great family but I never felt I fitted in and I was with the wrong crowd. I didn’t like myself and I had low self-esteem.

“The substances I took filled that void and I was confident. When I started taking drugs there wasn’t much drugs and lots of laughter, by the end there was lots of drugs and no laughter.

“I started smoking cannabis and ecstasy and drinking alcohol and by 14 I was selling LSD – there wasn’t much profit in it – it was so I could buy more drugs.

“I progressed to methadone reefers by 17 and I got really good at blagging doctors for prescription drugs.

“In the beginning it was very enjoyable but drugs lied to me. They promised me not to worry and that I’d never feel sadness or pain and at the time it was exciting and by 18 I was an addict.

“Then doctors around Wrexham stopped prescribing methadone and I was addicted to them and I woke up feeling ill, vomiting, and that was the withdrawal symptoms.

“Since then I’ve put myself through detox so many times and then just convinced myself that just having one would be okay.

“I’ve moved away because I thought it was the place rather than me that was the problem.

“I lived in Liverpool and in Lancashire and I went to prison for the first time for dealing in 2008 and after that I actually got a good job, working for a bakery, and progressed to senior sales assistant but then went to jail again in 2013.”

In the meantime Zoe had also had three daughters and the loss of them and her mum falling ill while she was in prison that made her determined to kick the habit.

She said: “I was robbing my children of their mum and robbing my mum of her daughter and the drugs weren’t masking the fact that my mum was looking after my children and the damage my addiction was doing to them and to her.

“On my daughter’s 18th birthday, the most important day of her life, I was in prison so when I came out I went on a 12-step programme with recovered addicts showing me there was a way out.

“The more I stayed clean, the more my family realised I meant it this time and now it’s exactly two years and a week that I have been clean to the day I received the award.

“I feel great and I can look myself in the mirror and can be a mum and a daughter and help others and repay the people and the community of Wrexham for the trouble I caused.

“I look at it like a relay race. Someone has given me the baton and that’s why I’m still clean and I pass that baton on to others.”

Mr Jones who nominated Zoe said: “Zoe has overcome a very long battle with her drug addiction and life of chaos and has turned her life completely around within the last two years and she is now a beacon of hope for many in the community.”